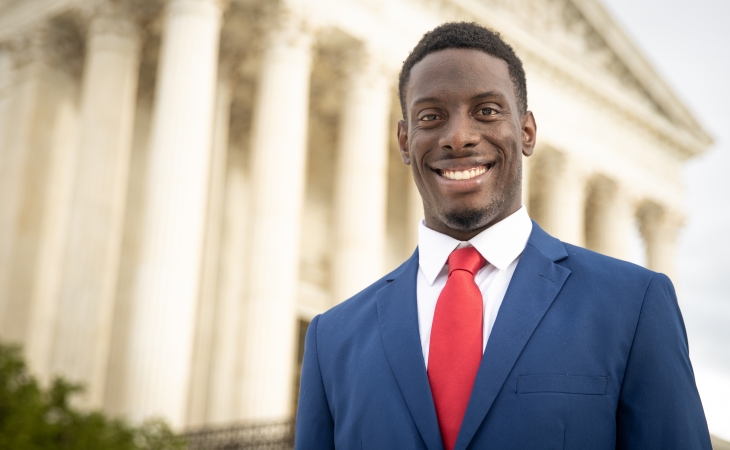 ATLANTA – A federal district court ruled Wednesday that government officials cannot escape a March U.S. Supreme Court decision that they can be held accountable for violating constitutionally protected freedoms. Alliance Defending Freedom attorneys represent Chike Uzuegbunam, who was prevented from sharing his faith on campus at Georgia Gwinnett College, a public college where Uzuegbunam was enrolled as a student.

The U.S. District Court for the Northern District of Georgia, Atlanta Division, ruled that the lawsuit, Uzuegbunam v. Preczewski, should move forward on its merits.

“For almost five years, Georgia Gwinnett College officials have been trying to dodge accountability for their illegal actions in violating Chike’s First Amendment rights, even after the U.S. Supreme Court rebuked them. The district court rightly put a stop to that,” said ADF Senior Counsel Travis Barham. “Government officials shouldn’t get a free pass when they engage in misconduct; it leaves victims without recourse, undermines the nation’s commitment to protecting constitutional rights, and emboldens the government to engage in future violations. We are pleased that the court is allowing this lawsuit to proceed. It is long past time for Georgia Gwinnett College officials to face up to their unlawful actions.”

In 2016, Georgia Gwinnett officials stopped Uzuegbunam not once, but twice, from peacefully sharing his Christian faith with fellow students on his college campus. First, officials said he had to get advance permission to use one of two tiny speech zones that made up far less than 1% of the campus and were only open 10% of the week. Despite following these policies, Uzuegbunam was again prevented from speaking, and another student did not speak at all after seeing how officials treated Uzuegbunam.

After ADF attorneys challenged the unconstitutional policies, Georgia Gwinnett argued that Uzuegbunam’s speech should receive no constitutional protection, changed its policy, and claimed it should be able to avoid any penalty for violating Uzuegbunam’s constitutional liberties. Two courts agreed, but the U.S. Supreme Court ruled 8–1 in Uzuegbunam’s favor, prompting the district court to hear the case again and also rule in his favor.

“We need to ensure that the wrong done to our clients is righted,” said ADF Senior Counsel Tyson Langhofer, director of the ADF Center for Academic Freedom. “The Supreme Court saw the importance of addressing these legal violations on the merits, and now so has the district court. Hopefully, this will send a signal to college and university officials nationwide that students do not lose their constitutional rights at the campus gates and that anyone who ignores these priceless freedoms can be held to account.”