Description:  In 2016, Georgia Gwinnett College officials stopped student Chike Uzuegbunam not once, but twice, from peacefully sharing his Christian faith with fellow students on his college campus. First, officials said he had to get advance permission to use one of two tiny speech zones that made up far less than 1% of the campus and were only open 10% of the week. Despite following these policies, Chike was again prevented from speaking. After ADF challenged the unconstitutional policies, Georgia Gwinnett argued that Chike’s speech should receive no constitutional protection, changed its policy, and claimed it should be able to avoid any penalty for violating Chike’s free speech rights. Two courts agreed, but the Supreme Court decided to hear Chike’s case and ruled in his favor. 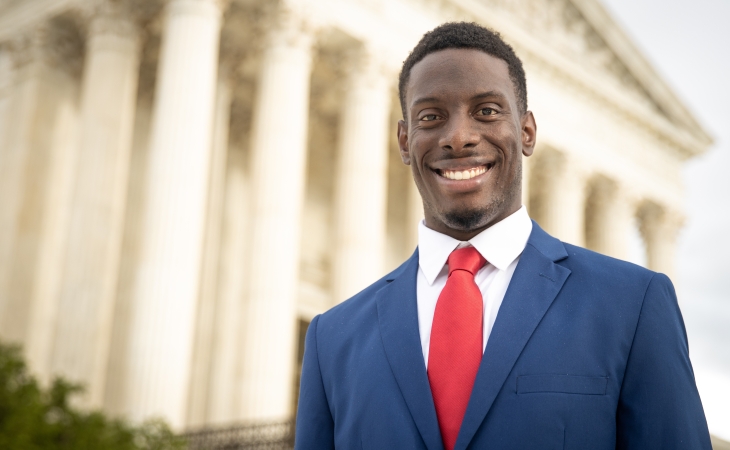 US Supreme Court gave Chike Uzuegbunam his first victory, now he wins it all in long overdue settlement

ATLANTA – After more than five years of litigation and an important mid-litigation Supreme Court victory for Chike Uzuegbunam and Joseph Bradford, Georgia Gwinnett College officials have agreed to settle the case, giving Uzuegbunam and Bradford the justice they were seeking all along. Alliance Defending Freedom attorneys represent the two former students, whom college officials stopped from sharing their faith on campus when they were enrolled there.

A federal district court ruled in December 2021 that government officials cannot escape the U.S. Supreme Court’s decision in Uzuegbunam v. Preczewski from March of that year, which concluded that they can be held accountable for violating constitutionally protected freedoms, and that the lawsuit should move forward on its merits. Choosing instead to settle Uzuegbunam’s and Bradford’s claims, Georgia Gwinnett College will pay nominal damages and attorneys’ fees totaling more than $800,000. The college has already changed the unconstitutional policies that violated the former students’ freedoms.

“This settlement represents a victory not only for Chike and Joseph but also for many other students who wish to exercise their constitutionally protected freedoms on the campuses of Georgia’s public colleges and universities,” said ADF Senior Counsel Travis Barham. “For five years, Georgia Gwinnett College officials have tried again and again to dodge accountability for their illegal actions in violating Chike’s and Joseph’s rights, even after the U.S. Supreme Court rebuked them. But after the district court put a stop to that, the college has finally decided to stop fighting the Constitution. This case should also remind other colleges and universities nationwide of the need to respect their students’ liberties. If they do not, they can and will be held accountable.”

In 2016, Georgia Gwinnett College officials stopped Uzuegbunam not once, but twice, from peacefully sharing his Christian faith with his fellow students on campus. First, officials said he had to get advance permission to use one of two tiny speech zones that made up far less than 1% of the campus and were only open 10% of the week. Later, they stopped him from speaking again, though he had followed these policies. Bradford did not speak at all after seeing how officials treated Uzuegbunam.

After ADF attorneys challenged the unconstitutional policies, Georgia Gwinnett College argued that Uzuegbunam’s speech should receive no constitutional protection, changed its policy, and claimed it should be able to avoid any penalty for violating Uzuegbunam’s constitutional liberties. Two courts agreed, but the U.S. Supreme Court did not, ruling 8–1 in Uzuegbunam’s and Bradford’s favor, prompting the district court to hear the case again and also rule in their favor.

“We are pleased that the wrong done to our clients has been righted,” said ADF Senior Counsel Tyson Langhofer, director of the ADF Center for Academic Freedom. “The Supreme Court saw the importance of addressing these legal violations on the merits, and so did the district court. Hopefully, this settlement will send a signal to college and university officials nationwide that students do not lose their constitutional rights at the campus gates, and that anyone who ignores these priceless freedoms can be held to account.”

In light of the settlement, ADF and Georgia Gwinnett College attorneys filed a stipulated dismissal Wednesday with the U.S. District Court for the Northern District of Georgia, Atlanta Division, to end the case officially.

U.S. Supreme Court should hold Georgia Gwinnett College accountable (Atlanta Journal-Constitution, 2021-01-12)
My college tried to stop me from speaking about religion. Now, we’ll meet in the Supreme Court. (Washington Post, 2021-01-11)
SCOTUS to decide whether constitutional rights can be violated without consequence (The Hill, 2021-01-11)
SCOTUS campus free speech case unites adversaries in polarized times (College Fix, 2020-10-28)
Free speech won at colleges in California and Ohio. It should win in Georgia, too. (Daily Signal, 2020-10-22)
ADF: Supreme Court should rule to protect free speech on campus; this egregious case shows why (Daily Wire, 2020-10-09)
Supreme Court to decide if constitutional rights are only valuable when a price tag is on them (Washington Times, 2020-07-15)
For sharing Gospel, college student has sought justice for 3 years (My Christian Daily, 2020-06-01)
Georgia college remains unchastened for saying handing out pamphlets is ‘disorderly conduct’ (The Federalist, 2020-04-27)
Atheists, Jews, Muslims, Catholics all asking Supreme Court to defend rights my college violated (Daily Wire, 2020-04-07)
Constitutional rights are priceless—someone should tell the 11th Circuit (The Hill, 2020-02-18)
What winning at the Supreme Court means to me—and to America (Newsweek, 2021-03-11)
Americans can hold government accountable for violating religious freedom (RealClear Religion, 2021-03-17)
What my win at the Supreme Court means for true freedom (Liberty University Standing for Freedom Center Journal, 2021-04-08)

Travis C. Barham serves as senior counsel for Alliance Defending Freedom, where he plays a key role with the ADF Center for Academic Freedom. He focuses his legal efforts on preserving and reclaiming religious freedom, freedom of speech, and freedom of association for students and faculty at universities throughout the country. His work has been instrumental in securing several strategic appellate court victories, including a public university free speech victory at the U.S. Supreme Court in 2021. Barham earned his Juris Doctor from Washington and Lee University School of Law in 2006, where he graduated summa cum laude. Barham is a member of the bars of Georgia and Arizona. He is also admitted to practice before multiple federal district and appellate courts, including the U.S. Supreme Court.