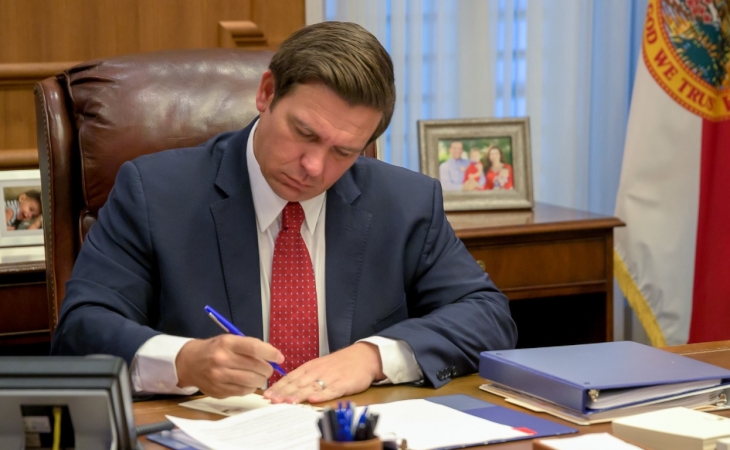 JACKSONVILLE, Fla. – Tuesday, Florida Gov. Ron DeSantis signed into law SB 1028, a bill that includes the Fairness in Women’s Sports Act, which protects opportunities for women and girls in athletics by ensuring they are not forced to compete against males participating in women’s sports. Florida joins Idaho, Mississippi, Arkansas, West Virginia, and Montana in protecting secondary and collegiate sports for women and girls.

“Girls deserve to compete on a level playing field. When the law ignores science and biological realities, women and girls bear the brunt of the harm,” Holcomb said. “Florida now joins a strong coalition of states that have acted to protect women from discrimination in athletics and preserve fair competition for all females, whether in high school or college. This bill safeguards athletic opportunities for women and girls and gives them vital legal recourse against unfair policies that arise. We commend Gov. DeSantis as well as Sen. Kelli Stargel and many other supporters in the Florida Legislature for moving ahead with this law despite the bullying from woke corporations and special interests that has taken place around the country to reject this type of legislation. Thanks to their leadership, Florida’s female athletes will not be reduced to spectators in their own sports.”

“In 2017, Connecticut began allowing two male athletes who self-identify as girls to compete in girls’ sports. During all four years of high school, I was forced to compete against them, even though they were bigger, faster, and stronger than me because they were male…,” said Soule in remarks she presented at the ceremony. “As someone who was one of the first to start speaking against this injustice, it is very encouraging that my story has reached people across the country, and that many have seen what’s happened in Connecticut and want to take a stand to protect the female athletes in their state and to protect women’s sports…. I am grateful to Florida lawmakers, and especially Gov DeSantis, for preserving fairness in women’s sports and allowing countless young girls and women the opportunity to succeed in the sports that they love.”

Christiana Holcomb serves as legal counsel for Alliance Defending Freedom, where she is a key member of the Center for Conscience Initiatives. Since joining ADF in 2012, Holcomb has worked to protect women's and girls' sports and has defended the bodily privacy rights of students. She has also worked to protect the constitutionally protected freedom of churches, Christian schools, and Christian ministries to exercise their faith without government interference. Holcomb earned her J.D. in 2010 from Oak Brook College of Law and Government Policy, where she graduated first in her class and served as a teaching assistant in criminal law. Also in 2010, Holcomb completed the ADF leadership development program to become a Blackstone Fellow. She is admitted to the state bar of California, the U.S. Supreme Court, and numerous federal district and appellate courts.