Description:  The same attorney who filed an unsuccessful complaint with the Colorado Civil Rights Commission in 2017 commenced a lawsuit in state court over the same custom cake request the attorney made at that time. The request was for a custom-designed cake, pink on the inside and blue on the outside, to reflect and celebrate a gender transition. Masterpiece Cakeshop declined that request because the customer specifically requested that the cake express messages and celebrate an event in conflict with owner Jack Phillips’ religious beliefs. The decision was not because of the person who requested it, as Phillips would not create a cake expressing the requested message no matter who asked for it. 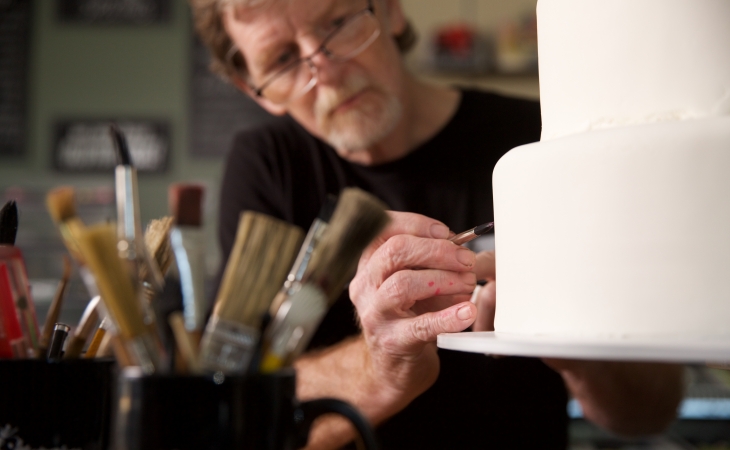 DENVER – Alliance Defending Freedom attorneys representing Masterpiece Cakeshop and its owner, cake artist Jack Phillips, filed a notice of appeal to the Colorado Court of Appeals late Monday in Scardina v. Masterpiece Cakeshop. A trial court issued a ruling in June that punished Phillips for declining to design a custom pink-and-blue cake celebrating a gender transition when asked to do so by an activist attorney.

“No one should be forced to express a message that violates their beliefs and conscience,” said ADF Legal Counsel Jake Warner. “Activists and government officials are targeting artists like Jack because they can’t promote messages on marriage and gender that violate their core beliefs. In this case, an activist attorney demanded that Jack Phillips create custom cakes in order to test Jack and to ‘correct the errors’ of his thinking, and the attorney even threatened to sue Jack again if the case is dismissed for any reason. This case and others like it represent a disturbing trend: Activists are weaponizing the legal system to ruin those who simply disagree with them. Someone you disagree with might be the one targeted today, but when political winds shift, it could just as easily be you or anyone else tomorrow.”

The attorney who filed suit requested a custom-designed cake, pink on the inside and blue on the outside, to reflect and celebrate a gender transition. Phillips’ shop declined that request because the customer specifically requested that the cake express messages and celebrate an event contrary to Phillips’ religious beliefs. The decision turned not on who was requesting the custom cake, but on what the cake would express. As the trial court found, Phillips would not create a cake expressing the requested message “for anyone.”

“Jack has been harassed for nearly a decade for living by his faith and making artistic decisions that artists have always made,” Warner explained. “That’s why we have appealed this decision and will continue to defend the freedom of all Americans to peacefully live and work according to their core convictions without fear of government punishment.”

Why the repressive Left can’t leave Jack Phillips alone (National Review, 2021-06-23)
Masterpiece Cakeshop owner Jack Phillips: How I became the face of ‘rights of conscience’ litigation in US (Fox News, 2021-05-17)
All cake designers deserve the same First Amendment freedoms (Detroit News, 2020-08-25)
I’m the Colorado cake artist, and I believe in artistic freedom for all (Newsweek, 2020-08-19)
Colorado baker Jack Phillips back in court after again being sued (My Christian Daily, 2020-04-09)

Kristen K. Waggoner serves as general counsel with Alliance Defending Freedom. In this role, Waggoner oversees the U.S. legal division, a team of 100 attorneys and staff who engage in litigation, public advocacy, and legislative support. On Oct. 1, 2022, she will assume the role of president and CEO as well. ADF has represented the prevailing parties in multiple U.S. Supreme Court victories, including Masterpiece Cakeshop v. Colorado Civil Rights Commission and Uzuegbunam v. Preczewski, both of which Waggoner argued at the Supreme Court. She also served as counsel in the free speech victory the Supreme Court handed down in National Institute of Family and Life Advocates v. Becerra. She is a Peer Review Rated AV® Preeminent™ attorney in Martindale-Hubbell, who clerked for Justice Richard B. Sanders of the Washington Supreme Court after law school and served in private practice in Seattle for nearly 20 years. Waggoner is admitted to practice in multiple states, the Supreme Court, and numerous federal district and appellate courts.

Jake Warner serves as senior counsel with Alliance Defending Freedom, where he is a key member of the Center for Conscience Initiatives. Since joining ADF in 2017, Warner has focused on protecting the conscience rights of individuals being unjustly forced to compromise their beliefs under threat of heavy fines and punishment. His practice also includes defending the freedom of Christians to exercise their faith in the marketplace without government interference. Prior to joining ADF, Warner served as a judicial law clerk to Senior United States District Judge Malcolm J. Howard in the Eastern District of North Carolina. Before his clerkship, Warner also engaged in private practice with the firm of Perry, Perry & Perry, in Kinston, North Carolina, where he primarily represented criminal defendants in both federal and state courts. Warner earned his J.D. at the Regent University School of Law, graduating magna cum laude in 2011. He obtained his B.A. in history and political science from the University of North Carolina at Chapel Hill in 2006. Warner is admitted to practice in Arizona, North Carolina, and the U.S. Supreme Court, as well as several federal district and appellate courts.