Description:  Lorie Smith is an artist who runs her own design studio, 303 Creative. She specializes in graphic and website design and loves to visually convey messages in every site she creates. She left the corporate design world to start her own small business in 2012 so she could use her skills to promote causes consistent with her beliefs and close to her heart, such as supporting children with disabilities, the beauty of marriage, overseas missions, animal shelters, and veterans. She was excited to expand her portfolio to create websites that celebrate marriage between a man and a woman, but Colorado made clear she’s not welcome in that space. A Colorado law is censoring what she wants to say and requiring her to create designs that violate her beliefs about marriage. She enjoys working with people from all walks of life, but, like most artists, can’t promote every message. Her decisions about which projects to design are based on what message she’s being asked to express, not who requests it. After realizing that Colorado was censoring her and after seeing Colorado use this same law to punish Masterpiece Cakeshop owner Jack Phillips, she challenged the law to protect her freedom and her art studio. 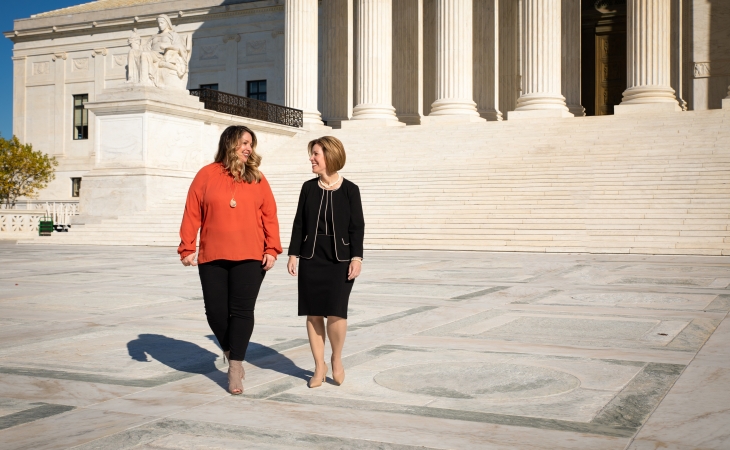 WASHINGTON – Denver-area graphic artist and website designer Lorie Smith and Alliance Defending Freedom CEO, President, and General Counsel Kristen Waggoner, who will argue before the U.S. Supreme Court on Smith’s behalf in 303 Creative v. Elenis on Monday, will speak at a press conference outside the court immediately following oral arguments.

The case concerns a Colorado law that requires Smith to communicate messages inconsistent with her beliefs. Even though Colorado officials have admitted that she works with people from all walks of life, including those who identify as LGBT, that she chooses what to create based on the message requested, and that every website she creates conveys a unique message, the state still says it can force her to speak messages about marriage that contradict her core beliefs.

“Free speech is for everyone. No one should be forced to say something they don’t believe,” said Waggoner. “And Lorie works with everyone. Whether she custom-designs a website or graphic, it always turns on what the message is, not who is requesting it. Like most graphic designers, every word she writes, every graphic she designs, and every custom website she crafts expresses a unique message—one that must be consistent with her beliefs, areas of passion, and personal expertise. Americans should be free to express their ideas even if the government disagrees with them. That’s true for Lorie just as much as the LGBT graphic designer, which is why a win for Lorie is a win for all Americans.”

The Supreme Court agreed to take Smith’s case after the U.S. Court of Appeals for the 10th Circuit issued a 2–1 decision holding that Colorado can compel her to create messages about marriage that violate her sincere beliefs even though her designs are, as the 10th Circuit admitted, “pure speech” and Colorado’s purpose is to completely “[e]liminate [her] ideas” from the public dialogue. The dissent called such compulsion an “existential threat” to freedom and the majority’s opinion “staggering” and “unprecedented” because the “Constitution protects Ms. Smith from the government telling her what to say….”

I will tell Supreme Court speech must be kept free, that you don’t lose your rights when you start work (Fox News, 2022-12-02)
For artists like Colorado’s Lorie Smith, the First Amendment protects the right not to speak (The Federalist, 2022-12-02)
Win for website designer at Supreme Court would be win for free speech for all (Daily Signal, 2022-11-30)
Our veterans provide the ultimate example of why we must defend freedom (Washington Examiner, 2022-11-13)
State tramples our First Amendment rights as Christian artists. We’re fighting back. (USA Today, 2022-10-05)
Colorado’s defense in Supreme Court case underscores attack on free speech (Denver Post, 2022-09-30)
Constitution Day is an opportunity to consider our founding charter’s necessity—and the threats to it (Townhall, 2022-09-16)
As my case heads to the Supreme Court, I am choosing to embrace a legacy of freedom (Washington Examiner, 2022-06-04)
Why my case could pick up where Masterpiece Cakeshop left off (National Review, 2022-06-03)
We need to talk about Bruno...and free speech (Daily Wire, 2022-04-28)
Supreme Court to decide whether the state can override your freedom to choose what you say (Washington Examiner, 2022-03-05)
Here’s what’s at stake in the Supreme Court artistic freedom case (Newsweek, 2022-02-24)
Colorado crushes a Christian’s conscience (WORLD, 2022-01-18)
A case that could bring great clarity to religious jurisprudence (Federalist Society Blog, 2022-01-14)
The Supreme Court’s chance to uphold artistic freedom (National Review, 2022-01-07)
On International Artist Day, many find creativity subject to constraint (Townhall, 2021-10-21)
Monopolizing the marketplace of ideas (National Review, 2021-09-27)
10th Circuit Court rules against religious liberty for artists like me (RealClear Religion, 2021-09-27)
Court ruling puts freedom of speech on the chopping block (Detroit News, 2021-09-15)
This web designer shouldn’t have to wait to be free to create (Daily Signal, 2019-11-14)
Lorie loves all things creative but Colorado wants to censor her (Christian Post, 2019-11-07)
State’s civil rights regulators once again crack down on artistic freedom (Colorado Politics, 2019-11-05)
My appeal for artistic freedom isn’t just for me, but for each of my competitors, too (Disrn, 2019-11-03)