Description:  Rather than participate in a wedding ceremony that violates her faith, floral artist Barronelle Stutzman referred Robert Ingersoll, a friend and client for nearly 10 years, to several nearby florists when he asked her about creating custom flower arrangements for his wedding to Curt Freed. Stutzman and Ingersoll then discussed the wedding plans, hugged, and Ingersoll left. He never filed a complaint with the attorney general’s office, which brought an unprecedented action against Stutzman because of news reports based on social media posts. Later, Ingersoll and Freed sued Stutzman through attorneys with the American Civil Liberties Union. 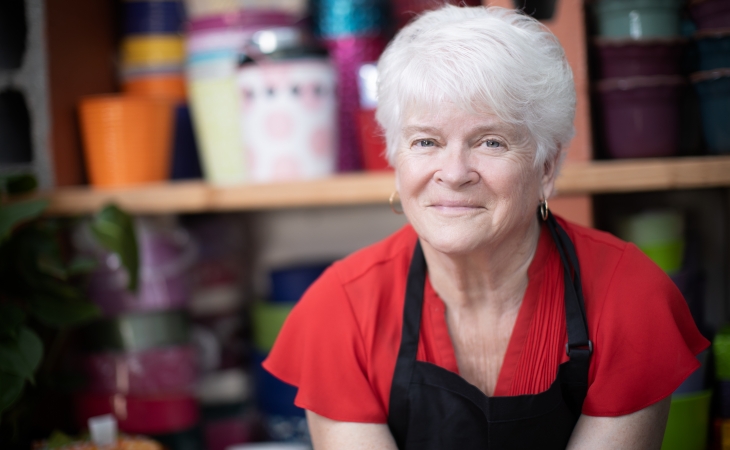 Stutzman: ‘I’ve never had to compromise my conscience or go against my faith’
Thursday, Nov 18, 2021

KENNEWICK, Wash. – A settlement agreement secured by Alliance Defending Freedom attorneys with the ACLU ends a lawsuit brought against floral artist Barronelle Stutzman nearly a decade ago without forcing her to act against her religious beliefs or to pay potentially ruinous attorneys’ fees—a threat she has endured for years. Stutzman has chosen to retire so her beloved employees can run her business, Arlene’s Flowers. She will withdraw a pending petition for rehearing at the U.S. Supreme Court and make a payment of only $5,000 to the two men who sued her.

Stutzman, 77 and a great-grandmother, explained that she is at peace because the settlement allows her to finally retire with her conscience intact, and she knows that the legal effort to protect the artistic freedoms of creative professionals will continue in cases like 303 Creative v. Elenis, which the U.S. Supreme Court could decide to hear soon.

“I am willing to turn the legal struggle for freedom over to others. At age 77, it’s time to retire” and let others carry on the fight for religious liberty, wrote Stutzman in a letter announcing the settlement. “I’ve never had to compromise my conscience or go against my faith. I’ve met so many, many kind and wonderful people, who’ve generously offered me their prayers and encouragement and support. And I’ve been blessed with outstanding attorneys through Alliance Defending Freedom who’ve given me not only their legal skills, but their thoughtful friendship.”

“Most of all, I’m thankful that God’s love has sustained me through all of the trials and challenges of these last few years,” Stutzman continued. “There is a great deal of division at work in our country today, but God has shown me again and again that His love is stronger than the anger and the pain so many are feeling. And He’s given me countless opportunities to share His love with others along the way.”

“This settlement is an end to a lengthy court case, not a change in or surrender of Barronelle’s beliefs,” said ADF General Counsel Kristen Waggoner. “Over the last eight years, Barronelle stood for the First Amendment freedoms of all Americans, even those who disagree with her about a deeply personal and important issue like marriage. And in so doing, she’s inspired millions of others in their own public and personal battles to live their faith without government interference.”

“ADF is proud to have represented Barronelle—and many of us have formed deep friendships with her,” Waggoner continued. “She laid the groundwork that makes it possible for the Supreme Court to take a case like 303 Creative and definitively protect the rights of creative profes­sionals like Lorie Smith, Jack Phillips of Masterpiece Cakeshop—who has now been sued for the third time—and many like them who have been victimized by officials demanding compliance with government orthodoxy. The Supreme Court needs to affirm the right of all Americans to speak and live consistent with their conscience.”

Rather than participate in a wedding ceremony that violates her faith, Stutzman referred Robert Ingersoll, a friend and client for nearly 10 years, to several nearby florists when he asked her about creating custom flower arrangements for his wedding to Curt Freed. Stutzman and Ingersoll then discussed the wedding plans, hugged, and Ingersoll left. He never filed a complaint with the attorney general’s office, which brought an unprecedented action against Stutzman because of news reports based on social media posts. Later, Ingersoll and Freed sued Stutzman through attorneys with the ACLU.

Passing the baton in the battle for religious freedom (WORLD Opinions, 2021-11-19)
Supreme Court leaves Americans guessing about the meaning of tolerance (Newsweek, 2021-07-07)
Fulton decision protects religious liberty, but what’s it mean for creative professionals? (National Review, 2021-06-24)
Washington state flower shop owner forced to worry about more than COVID-19 pandemic (Washington Examiner, 2020-05-04)
How do we weigh a floral designer’s dignity and freedom against state coercion? (Religion News Service, 2020-03-18)
Philadelphia case shouldn’t stop Supreme Court from taking floral artist case (The Hill, 2020-03-05)
Florist Barronelle Stutzman deserves another chance at justice (Fox News, 2020-01-16)
Justices should use florist case to settle free speech issues (Law360, 2019-11-20)
Christian florist: My longtime customer was a friend, then he sued me over his gay wedding (USA Today, 2019-10-08)
Your religious liberty is in danger if I lose mine in a same-sex wedding court case (Fox News, 2019-09-28)
Why Barronelle Stutzman’s case might resolve questions left open in Masterpiece Cakeshop (National Review, 2019-09-17)
Washington state is ignoring Supreme Court precedent—and mistreating Christians (Daily Caller, 2019-09-13)
How Masterpiece Cakeshop fell short (Wall Street Journal, 2019-06-20)
Washington state may have triggered the next major religious liberty case (Daily Signal, 2019-06-12)
Floral artist has good reason to head back to Supreme Court (Washington Examiner, 2019-06-11)
Arlene’s Flowers case no way to settle disputes (Tri-City Herald, 2018-12-10)
Washington state, ACLU aren’t letting up in crusade against florist’s religious liberty (Daily Signal, 2018-11-15)
My state turned my life upside down because of my religious beliefs (Gospel Coalition, 2018-07-02)
Washington state florist: My life has been turned upside down because of my religious beliefs (Fox News, 2018-06-29)
Here’s why the florist and the baker aren’t like the Red Hen’s owner (PoliZette, 2018-06-28)
A tale of two business owners (Daily Wire, 2018-06-27)
Floral artist faced same intolerance as Jack Phillips (National Review, 2018-06-25)
All we ask is for the freedom to live out our beliefs (USA Today, 2018-02-25)
LGBT ideology could cost a 72-year-old florist everything (The Daily Caller, 2017-08-09)
Barronelle Stutzman shows sexual orientation laws treat religious people like racists (The Federalist, 2017-02-27)
Will court ruling against Christian florist prompt Trump to action on religious freedom? (CNS News, 2017-02-24)
Arguments separating fashion designers from other artists aren’t worthy of the runway (National Review, 2017-01-23)
Artists’ free speech rights at stake in Washington florist case (Daily Signal, 2016-11-29)
When do ‘state messages’ trump free speech? (Seattle Times, 2016-11-23)
Liberal logic on designer who won’t dress Melania: conscience rights for me but not for thee (CNS News, 2016-11-21)
My case should concern everyone (Spokesman-Review, 2016-11-12)
Florist: LGBT rights law could destroy my business (Indianapolis Star, 2016-01-27)
Why a friend is suing me: the Arlene’s Flowers story (Seattle Times, 2015-11-09)
Arlene’s Flowers owner disappointed with editorial (Tri-City Herald, 2015-07-21)
I’m a florist, but I refused to do flowers for my gay friend’s wedding (Washington Post, 2015-05-12)