Description:  Vermont school officials suspended Travis Allen from his coaching job and disciplined his teenage daughter Blake Allen for calling a male student “a dude” and using male pronouns when expressing their view that the male student should not be allowed to change in the girls’ locker room. 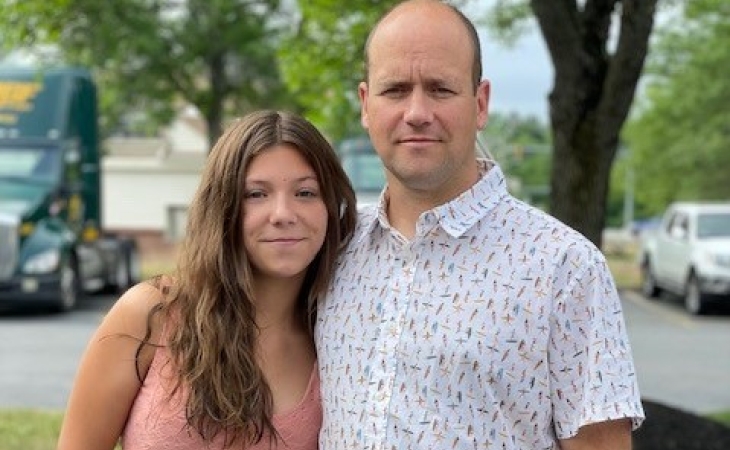 BURLINGTON, Vt. – Alliance Defending Freedom attorneys filed a federal lawsuit Thursday on behalf of a father and his teenage daughter whom Vermont school officials punished for calling a male student “a dude” and using male pronouns when expressing their view that the male student should not be allowed to change in the girls’ locker room. ADF attorneys represent Travis Allen and his 14-year-old daughter Blake Allen in their lawsuit against officials at Orange Southwest School District and Randolph Union High School after school officials suspended Travis from his coaching job and disciplined Blake in violation of their freedom of speech.

“A father and his daughter voicing concerns about a school allowing a male student to enter a high school locker room where girls are undressing is entirely expected and appropriate, regardless of whether the male identifies as female,” said ADF Senior Counsel Philip A. Sechler. “Yet for expressing such a commonsense view and noting the fact that the student is a male, Vermont school officials punished Blake and Travis in an effort to silence their views. The First Amendment protects everyone’s right to freely share their beliefs, and we will be asking the court to swiftly halt the school’s blatant violation of Blake and Travis’ free speech rights.”

The controversy began in September, when a 14-year-old male student who identifies as female and plays on the Randolph Union High School girls’ volleyball team entered the girls’ locker room while the girls were changing. Multiple girls in the locker room, including Blake, became upset, and multiple parents, including Blake’s mother, called the co-principals’ office to object. School officials told the concerned girls and parents that the male student could use the girls’ locker room even while the girls are undressing or showering, and that if any girls feel uncomfortable, they should use a single-stall restroom outside the locker room.

The day after this locker room encounter, Blake shared her concerns with three classmates explaining that the student “literally is a dude,” and “he doesn’t belong in the girls’ locker room.” Although the male student was not in the class, the school began an investigation into whether Blake’s comments constituted harassment and bullying and banned the entire girls’ volleyball team from using the girls’ locker room.

On Oct. 21, the co-principals notified Blake she was guilty of harassment and bullying of “a student on the basis of the targeted student’s gender identity.” As punishment, school officials told Blake she must “[t]ake part in a restorative circle with … our Equity Coordinator and at least two students who can help her understand the rights of students to access public accommodations … in a manner consistent with their gender identity," submit a “reflective essay," and serve out-of-school suspension. Shortly after filing the lawsuit on Thursday, counsel for the school officials notified ADF attorneys that the superintendent was rescinding the disciplinary actions against Blake.

Travis expressed his views on the locker room incident on a local news station’s Facebook page that linked to its news article of the incident. A user identifying as the “mother of the trans student in question” claimed Blake “made up the story for attention,” and that “truth will prevail.” In response, Travis posted, “The truth is your son watched my daughter and multiple other girls change in the locker room. While he got a free show, they got violated.” The district superintendent determined that by writing that comment, Travis had “misgendered a transgender student” and suspended Travis from his job as the middle school girls’ soccer coach without pay for the rest of the season.

ADF attorneys filed the lawsuit, Allen v. Millington, in the U.S. District Court for the District of Vermont.

My high school punished me for saying a male shouldn’t be allowed to watch me undress (Fox News, 2022-11-17)

ABOUT Philip A. Sechler

Philip A. Sechler serves as senior counsel at Alliance Defending Freedom, where he focuses on academic and religious freedom. Before joining ADF, Sechler had a long career in private practice, with substantial first-chair trial experience in courts around the country on a variety of complex litigation matters. He was also a Distinguished Visitor from Practice at Penn State Law School, where he spent four years teaching. He also taught at the Antonin Scalia School of Law at George Mason University and at the Georgetown University Law Center, where he continues to teach a course on Professional Responsibility. Sechler received his bachelor’s degree with high distinction from Pennsylvania State University, and he earned his Juris Doctor from Georgetown University Law Center, where he graduated summa cum laude and was Editor-in-Chief of The Georgetown Law Journal. Following law school, he clerked for the Honorable Francis D. Murnaghan, Jr., of the U.S. Court of Appeals for the 4th Circuit. Sechler is an active member of the District of Columbia Bar and is admitted to practice before the U.S. Supreme Court and numerous federal appellate and trial courts.