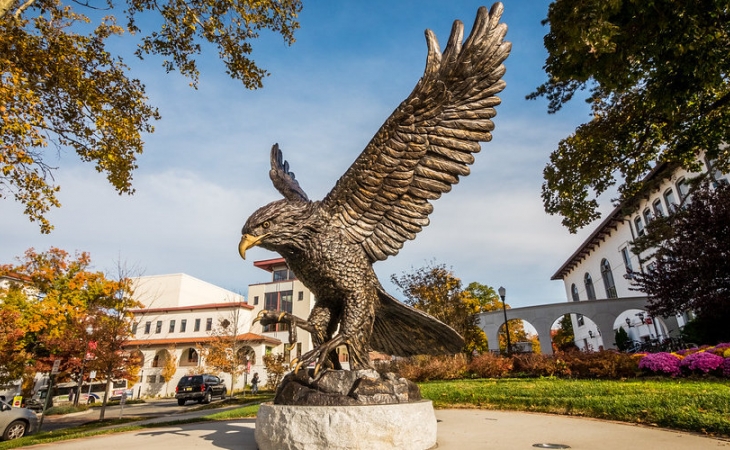 NEWARK, N.J. – A student and a student group represented by Alliance Defending Freedom attorneys filed a federal lawsuit against Montclair State University officials Wednesday after they forced students to stop peaceful, expressive activity without a permit. The lawsuit also challenges the university’s Bias Education Response Taskforce and an unconstitutional class system that grants preferential treatment to student organizations based on their viewpoints.

On Sept. 10, 2019, Mena Botros and two fellow students dressed in orange jump suits and held up signs voicing their support—as pretend criminals—for gun-free zones. The purpose was to express their belief that laws creating gun-free zones only benefit criminals and harm law-abiding citizens. Despite peacefully expressing their ideas in a common outdoor area of campus, a campus police officer forced them to stop. He told the students that anyone who wants to speak on campus has to obtain permission at least two weeks in advance and that the dean’s office would assign them a time and place to speak. The students, affiliated with Young Americans for Liberty, are challenging the two-week requirement because it unconstitutionally suppresses all speech and because it allows the university to deny or delay a student’s request for permission for any reason.

“A public university is supposed to be a marketplace of ideas, but that marketplace can’t function if officials impose burdensome restraints on speech or if they can selectively enforce those restraints against disfavored groups,” said ADF Legal Counsel Michael Ross.

The lawsuit also challenges two other university policies. The first gives the university’s student government complete discretion to rank student organizations into “classes” that function as a class system for preferential treatment on campus, including a group’s access to funding from mandatory student fees. The second policy involves the university’s maintenance and mobilization of a Bias Education Response Taskforce, whose express purpose is to suppress speech that may make others uncomfortable.

“Montclair State punishes student organizations that express unpopular views and allows officials to silence any students who express a viewpoint that officials deem offensive or uncomfortable to other students,” Ross said. “Policing peaceful student expression that the university doesn’t favor is blatantly unconstitutional and directly opposed to the mission of public universities to encourage and allow the discussion of ideas.”

YAL at MSU is a non-partisan, student-led organization and was first officially registered as a student organization at the university in the fall of 2018. YAL’s mission is to identify, educate, train, and mobilize students to promote the principles of the natural rights of life, liberty, and property. While YAL student participants are required to pay student fees that fund speech and groups with which they disagree, the university classifies YAL in the lowest category of groups, which bars them from requesting any funding.

“Montclair State’s policies regulating speech in this fashion are not at all acceptable or constitutional,” said ADF Senior Counsel Tyson Langhofer, director of the ADF Center for Academic Freedom. “Because today’s students will be tomorrow’s leaders and voters, universities should promote the First Amendment values that they are supposed to be teaching instead of telling an entire generation that the Constitution doesn’t matter.”