Description:  Washington, D.C., officials refused to grant permission for The Frederick Douglass Foundation and Students for Life of America to paint a pro-life message on a city street shortly after the city allowed the painting of other messages on a different street. When members of the pro-life groups began to chalk temporary messages on a sidewalk, police arrested them. 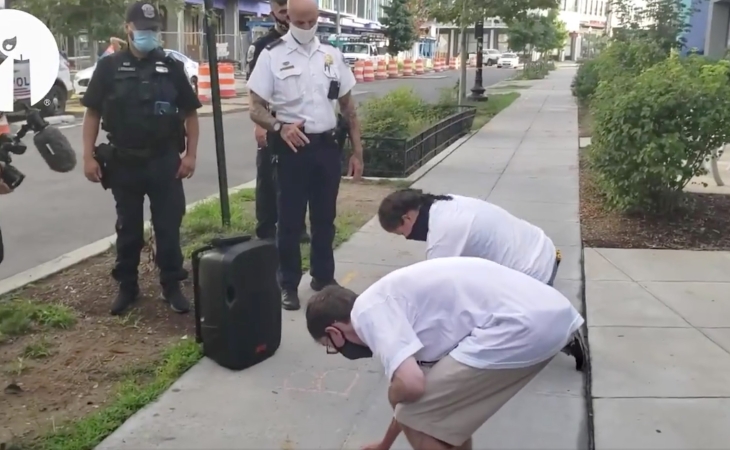 Pro-life groups ask DC Circuit for freedom to peacefully express their views, same as other orgs

The appeal asks the court to uphold the First Amendment rights of members of the Frederick Douglass Foundation and Students for Life of America after a lower court dismissed their case. The two pro-life groups filed suit after city officials refused to grant them permission to chalk a pro-life message on a city sidewalk after allowing the painting of other favored messages on city streets.

“Washington officials can’t censor messages they disagree with. The right to free speech is for everyone, and The Frederick Douglass Foundation and Students for Life should be able to exercise their constitutional freedom to peacefully share their views the same as anyone else,” said ADF Senior Counsel Erin Hawley, who will be arguing before the court on behalf of the pro-life organizations. “We urge the D.C. Circuit to rule in favor of free speech and to allow our clients’ voices to be heard as they engage in important cultural and political issues of the day.”

In June 2020, the mayor commissioned a mural reading “Black Lives Matter” in permanent yellow paint. Protestors quickly added their “Defund the Police” message to the mural and painted other permanent protest art on D.C. streets and private property. The city left these favored messages in place for months. Yet when the Frederick Douglass Foundation and Students for Life of America sought to chalk a different message—“Black Pre-Born Lives Matter”—outside of the D.C. Planned Parenthood, they were arrested by the Metropolitan Police Department. ADF attorneys filed the lawsuit, The Frederick Douglass Foundation v. District of Columbia, on behalf of the groups.